Many people will be reflecting on Memorial Day today, cooking out and spending time with family and friends. In addition to celebrating our veterans, we are celebrating our one-year anniversary on Twitter. 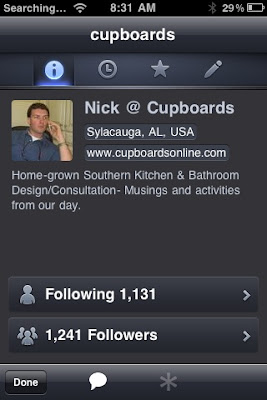 Most of you that follow me on Twitter or know me on a face-to-face level know that I am one of the few folks under 30 that hasn't ever had a Facebook page(I think there are like 4 of us. Ha!). My reluctance to jump in to the Facebook craze is merely personal; and the jump in to Twitter was completely professional. While the recent privacy assault on Facebook has reassured me that Facebook neglect wasn't such a bad thing on my part, my Twitter activity has been a very personal(and professional) experience.

I first signed up for Twitter because a close friend had and account and said that it might be something I want to look in to. He is witty and the 140 characters were often the perfect amount of space to toss a bit of snark in to the world and usually draw a good laugh from me. I knew going in that Twitter could offer a way for me to connect with customers and potentially industry pros and cohorts that could/would offer inspiration and ideas when that creative block is in full effect.

Well, I was almost right.

Twitter has been one of the single most rewarding things I have done, both professionally for Cupboards and even though I was not expecting it, personally.

The connections that have blossomed from what seems like simple quick snips to full-blown friendships. My generation came right at the beginning of the 'fully-electronic' one. We still had to go to the library in college to look at the books so occasionally I still have the distrust of certain technological things. My expectations for Twitter were nothing compared to what actually happened once I engaged myself with other quality tweeps(people on Twitter).

Some days are busier than others and so some days I tweet more than others- Cupboards Twitter is averaging 11.8 tweets a day. I It seems very strange to think about a day without Twitter simply because of the connections that I've made. It's a lot like showing up at a transcendent water cooler and exchanging cordials with coworkers.

So after one year, Twitter has fulfilled every imaginable positive effect I could imagine.

I appreciate the friends that I have made and look forward to developing those relationships and building new ones. Thanks for your help and information... I don't feel like one of the new kids anymore!

Posted by Nick Lovelady at 8:47 AM