Continuing the theme of good design thoughts gone horribly wrong, we are now in to the realm of salvaging actual waste for furniture.
I have always advocated healthy and responsible reuse of household items and certain building materials. I'll be the first to admit that a reclaimed wood floor is nothing short of breathtaking.
The trend of bringing shipping pallets in to the home is breathtaking for all the wrong reasons.
Wood shipping pallets often start out in a fairly sanitary state. Unfortunately, most find some part of their life out of doors exposed to water, all manner of vermin and insects, not to mention bird droppings and other nastiness. 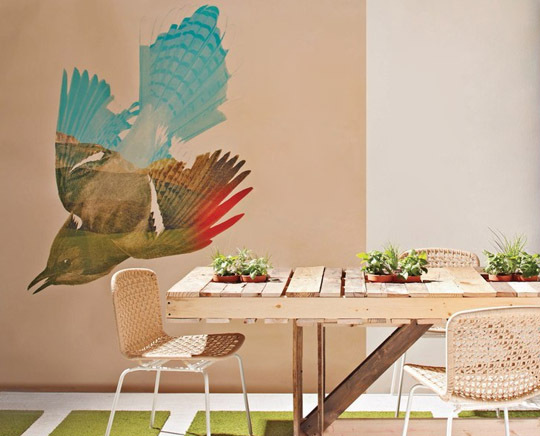 via
Let's start here.
Remember when E. coli was running rampant through the romaine lettuce community last year? The National Consumers League(NCL) did some testing on shipping pallets just like the ones formed in to a table above. They found that 10% of the pallets tested contained E. coli. Almost 3% contained Listeria, one of the more virulent of food borne pathogens that has a 20-30% mortality rate.
With an opportunity to gather any moisture, these very pallets could also be a breeding ground for salmonella.
Sorry, but even at seemingly small chances, it's not something I want to eat on. The website this table is listed on also includes plans to build your own. I guess you'd have to build your own because I don't know a single professional work worker that would dream of suggesting this for any one's dining space. I do like the wall decal though... very nifty. 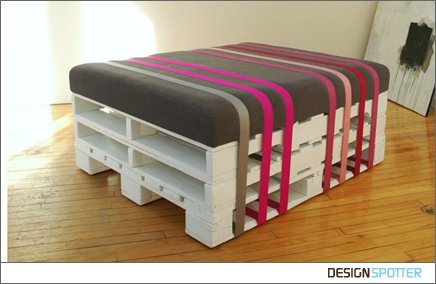 via
On to another recall... In 2009, Tylenol recalled all EZ-open 100-count Arthritis Pain Medication after it was discovered that a chemical called 2,4,6-tribomophenol(a fungicide) caused a bizarre, unpleasant odor in its medication. Who did Tylenol blame? Pallets.
The very same type of chemical is also blamed for $10 billion in damages from what wine producers call "cork taint".
Again, not something I want in my house. 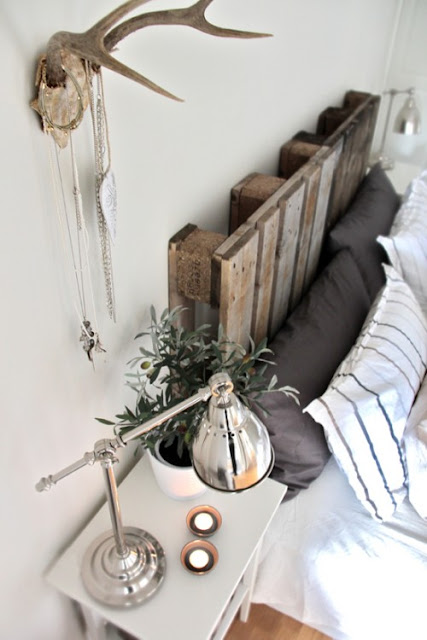 via
Even worse than solid wood shipping pallets are those that contain engineered wood or cardboard. Most low-grade engineered wood products contain formaldehyde. See the blocks between the planks and rear frame on the pallet headboard above? That's exactly what I'm talking about.
In addition to potentially harmful chemicals used to make or treat the pallets, any potentially noxious chemicals that are shipped ON the pallets could result in out-gassing anytime afterward.
Cardboard and some other engineered wood products are also havens for little creepy-crawlies. I don't like roaches at all- At Cupboards, we don't even keep shipping pallets in the warehouse. 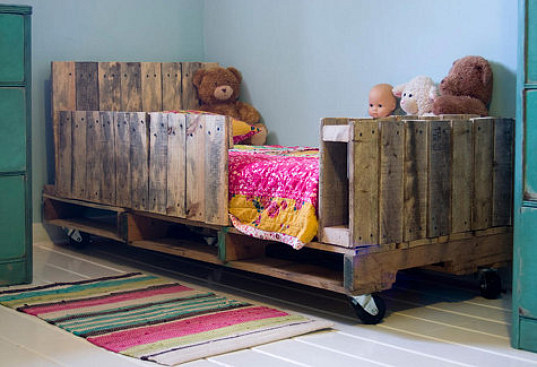 via
And the single most mortifying place for shipping pallets has to be a child's bedroom. This lady built a toddler bed from pallets and later a bigger child's bed out of similar said shipping pallets. She undoubtedly received some harsh criticism as she has a reminder to "be nice" in her comments section.
Well, nice or not, it's not a smart move to make a kid's bed out of trash.
Some of the "claims of safety" about pallets are easily refutable. Like:
"The pallets I use were dry-kilned." Well, they very well may have been. In fact, most shipping crates and pallets in the US and Canada are dried before they are used. Why? Mold. Mold grows where ever there is moisture and heat available. If your dry-kilned pallets are left outside even once in a humid climate or rain they're as wet as they need to be to grow a whole heap of mold.
"I sanded and washed the pallets so they're safe." Any number of wood-boring insects could still be in your pallets... even the common American and German cockroaches. Chemicals and many pathogens could also still be present.
"I know where the pallets came from." Most companies reuse pallets, too. Even though they are made from one of the lowest grades of solid wood possible, they aren't cheap. It's not uncommon for pallets to make more than one trip(and VERY common for them to spend some time either outside or crawling with vermin in the meantime).
So there's my little rant. If you want something that looks like a pallet, I'm all for suggesting you build yourself a little piece of wood furniture with your local woodworker/carpenter and enjoy having a piece that is uniquely yours.
Reusing a potentially dangerous and cheap wood product just to say that you did it isn't commendable. Risky, but certainly not something to brag about.
________________________________________________
Feel free to disagree! I do think there is a place for wood shipping pallets in a reuse environment. They make great(though not permanent) compost pile frames and insect hotels for gardens. There's a way to use a reclaimed shipping pallet... just leave them outside!
Posted by Nick Lovelady at 4:55 AM

Email ThisBlogThis!Share to TwitterShare to FacebookShare to Pinterest
Labels: pallets, when trends attack