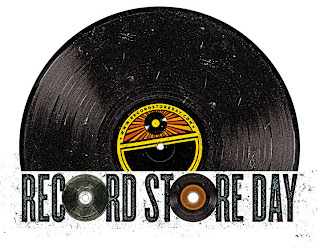 As I was fishing around in my car for a CD to replace the Elvis Costello that’s been on constant rotation, I realized it: I live in a college town, and THERE ISN’T A SINGLE REAL RECORD STORE IN IT!
When I was a kid, in other words prior to that moment of realization that I was the old guy at the bar that I used to make fun of, there were FOUR independent record stores in my town.  My favorite was “Wildman Steve’s Record and CD Exchange“, but I’m sure a trip to any of them felt pretty much the same.
As I recall, Wildman’s was shoe-horned between a tattoo parlor and a florist, and I don’t recall ever seeing anybody go in either one.  To step in to Wildman’s was to be greeted by a tinkling bell and the overwhelming stench of patchouli.  If you stopped long enough to let your eyes adjust to the low light, you’d see the proprietor eying you over a pair of Lennon-esque glasses, his dashiki and jort uniform the same as the last time you came in.
I always thought he was annoyed to see me…now I realize he was just judging the potential of any of my money staying in his store when I left. It’s got to be hard to make your living at $11.99 a pop…assuming nothing was sold out of the back of the store.  I never knew for sure…but I had my suspicions. We’ll leave it at that.
The music you could buy there?  Now that I think about it, the stock wasn’t that great…again making you wonder about back-door medicinal vending.  But I realize now that Wildman was my Dick Clark and my Casey Kasem all rolled into one chubby, gray-haired hippie.  He only sold what he liked, and in that way he was the single greatest influence on my musical tastes.
I have him to thank for that.  I blame him, too…for an 8 year college career all too often spent driving to out of state Phish and Allman Bros. concerts.
I’m sure digital downloads took him down.  It’s like I looked up one day and the store was gone…replaced by a generic chain Burrito restaurant.  In the end, his legacy lives in the musical tastes of about a decade’s worth of Auburn University students.  There could be worse legacies, I suppose.
We could be listening to Lady Gaga or Kanye West…
Record Store Day 2011 is coming up April 16th.  If you’ve got an independent record store in your area, how about taking a visit for me?
____________________________________________________________

Jerod LeCompte lives in Auburn, and truly believes
it is "the loveliest village on the plains".  He spends
his free time critiquing other people's accomplishments,
figuring out which beach his jet-setting wife is
laying out on each weekend, and patching
Jeep Cherokees together with bailing twine.
We are thankful to have Jerod as part of the Cupboards
extended family!
Posted by Nick Lovelady at 8:11 AM