#LetsBlogOff - Plugged In or Shut Out? 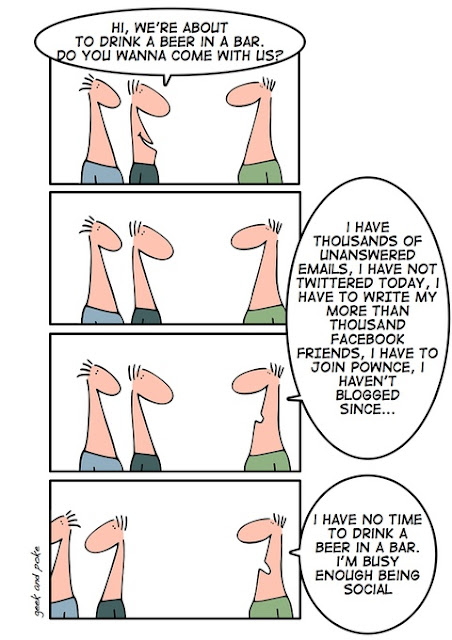 toon via
The latest in the #letsblogoff series-
Do social sites like Facebook connect the world or isolate people?
_____________________________________________________
Since you already have Facebook open on another of your tabs, look me up.
Wait a minute, you can't. Why? Not on Facebook. So I'm seriously in the minority considering that 500 million people are active users(and according to Facebook, 50% of that are online at least once a day).
Do I have any right commenting on Facebook then, as an obvious hold-out? Sure I do. That's my right as the Head Typist on this blog and most know that I have a comment on just about everything. I'm not going to get in to why I don't have Facebook, other than to say that it has absolutely no appeal to me personally. When I deleted my Myspace page a couple years ago, my personal online social life ended. 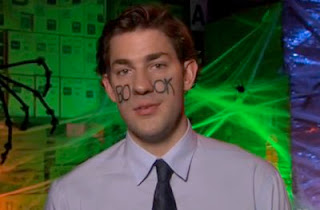 Everyone uses social media for something different from the next user. The marvels of Twitter and linking it with Cupboards has been somewhat a whirlwind of social successes. When I step back and look at the last 16 months(our active Twitter life), I recognize that without it my daily life would be different. There are pros and cons to everything we do in life, and my visual nature wants me to write down a list(so I did). My list has lots of pros(not going to go in to all of them):
Think about it... In each industry you have trade shows and conventions and the like. What's the average interaction like in that environment? Shake hands, exchange niceties and business cards, try to keep from standing in the middle of the aisle and disrupting the flow of scurrying convention-goers. Sheesh. Those same meetings now go something like this: Connect on Twitter, talk/email/chat on phone about things you might/might not share with strangers(for weeks/months/years), plan to meet at convention but text each other at the airport and embrace like long lost cousins. (You think it's crazy... well maybe it is crazy, but its reality nowadays)


Are the people that I have connected with on social media my friends? I certainly think so, and if someone close by tweeted me and invited me to the ice cream parlor or coffee shop for a visit, I doubt it'd be a hesitation.
The next time you're on Twitter, do some fun searches... like "customer service fail" or "bad service" and marvel at what comes up. If you haven't, you'll be shocked at how honest(fairly or otherwise) that people are. Businesses have to do better or risk the barrage of not just negative comments, but nasty ones. Gone are the days of quietly mentioning to the manager that there was a fly in your soup.


There are only a few cons that I could come up with as far as my social media use goes... I get less time to look at ebay, the world knows I eat WAY too much ice cream and until the rest of rural South businesses catch up I am occasionally told that I'm just "wasting time."
The cons aren't so bad... I spend less money when I'm not on ebay, I like ice cream and I've rarely given a whole lot of credence to negative people. 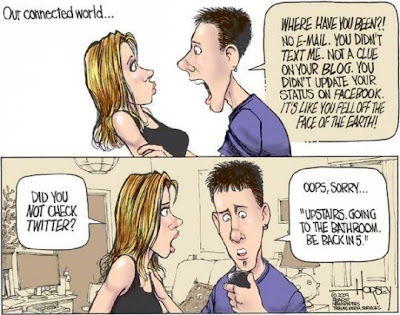 toon via
The big question is whether or not the social media in my life inhibits my personal life and interaction. I can confidently say that it has done the polar opposite. We have a small business in a small town. As much as I would love to say that Cupboards has the same amount of foot traffic as Wal-Mart, it doesn't. There are some days that I just don't see a whole lot of people, and after having your head stuck in a series of folders for a few hours it's nice to be able to take a few minutes and laugh at a blog post or chat with a friend on Twitter(or Facebook, if that's your deal).

Am I interested in every time someone has a snack or runs to the bathroom? No, and I try to leave those same details out of the Cupboards twitter stream. The balance between a business social media presence and a personal one is a careful dance though, and I believe that without some personal touches even the biggest most corporate social media accounts get stale. Therefore, my tweeps(twitter followers) occasionally get the dose of football-cheering, motorcycle-riding, sunrise-enjoying, dog-walking, recipe-sharing personal stuff that I do on a daily basis.

Exactly 6% of the people in my cell-phone contacts list are folks I follow on Twitter. If social media inhibits personal interaction, it isn't showing up in the numbers.

Maybe I'm the exception, but without social media my daily interaction with people would take a major hit- not because I ignore those around me in real life, there just aren't that many people around. Social media has been really good to Cupboards, and me personally. It'd be sad to give it up.

Now... I'm gonna go tweet this so my friends can read it!
Posted by Nick Lovelady at 6:30 AM