In the Kitchen with Columbus

Well, 517 years ago today-ish, Chris Columbus and his merry band of seafarers "discovered" the new world. History buffs can argue whether Leif Erikson got here way earlier or if since there were folks standing on the banks when both pulled up, if they really discovered anything at all- or merely showed up to the party.

Nonetheless, Columbus Day for me has always signaled the real end of summer and beginning of fall weather(as I type this, the weather man is telling me it's going to be 91 degrees today). Alabama summers go on forever and typically this is the time of year things start to cool off. The next couple weeks usually bring the fall foliage so many flock to Cheaha State Park(Alabama's Highest Point and fairly nearby, as the crow flies) and other wooded gems around the country.

This Columbus Day I'll be working(unlike lots of you) on dream kitchens for our customers. I thought it would be neat to take a brief look at the dream galley that Columbus and his crew had on the cruise over from Europe. 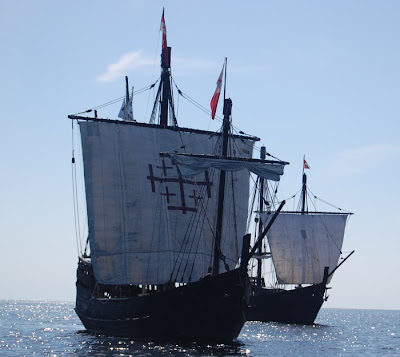 not the actual Nina and Pinta, but pretty darn close
Columbus left on August 3, 1492 with a map of a flat-world that said he should end up somewhere in the Far East of Asia. The ships were stocked with food provisions(according to some historians) that would last them nearly a year. Of course I think they have stacks and stacks of pop-tarts and cases of Diet Coke when in fact, they carried basic spices, fresh water, dry goods and livestock. Live livestock. Can you imagine sharing your Santa Maria stateroom with cows, pigs and chickens?
The galley(kitchen- it's cool that I use "ship-talk" eh?) of ships of the day were a far cry from the trans-Atlantic Queen Mary 2. Most ships carried one major cooking method called a fogon. It's really a fairly simple firebox and not a safe one, mind you. 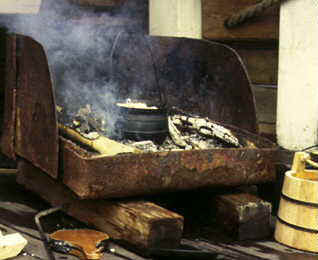 Who turned off the fogon?
Definitely not that Viking Range we all covet. Most of the food the crew ate was boiled, sans utensils. Yummy, huh? The firebox had to be manned as along as it was lit, for any stray spark would surely leave the crew swimming to the New World. Lots of days the crew would need to fish their meals from the sea.
So even though Columbus didn't make it to what is now the US mainland, we celebrate their trip today- thank goodness if I ever have to ride a boat across the Atlantic Ocean, the Cunard line looks much better than the Nina, Pinta and Santa Maria.
Happy Columbus Day!
Posted by Nick Lovelady at 6:57 AM