Rarely do I take a stance on a local current event, but this one has hit particularly close to home. As a rabid college football fan living in the state of Alabama, everyone knows the magnitude of the rivalry between Auburn University and the University of Alabama. Each school is rich with tradition, whether from a position of winning titles or playing spoiler. 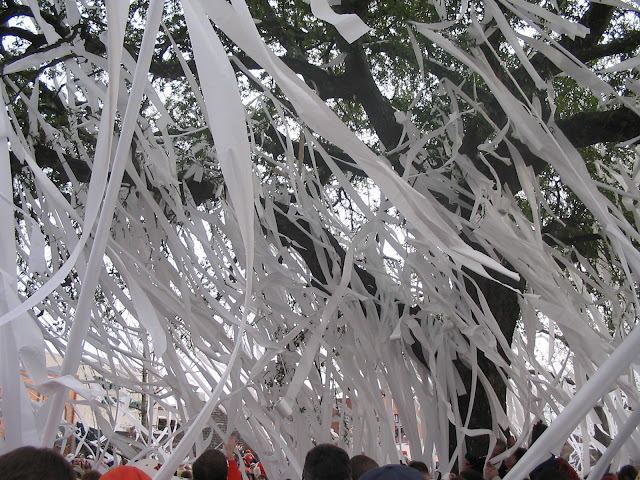 via
Toomer's Corner in downtown Auburn, Alabama is the intersection of College and Magnolia Streets. The calming watch of Samford Hall(the most iconic building on the campus of Auburn U) stands nearby. After a major win, graduation or any other event to revel in, students and fans "roll" the two storied oak trees that are perched stately on the corner.
On January 27, a guy identifying himself as Al from Dadeville(AL) called the Paul Finebaum Radio show(a sports show based out of Birmingham, AL) and claimed to have poisoned the trees with a very lethal herbicide. As of this week, at least part of his claim was true. State laboratories found up to 60 times the lethal dose of a herbicide called Spike 80DF, a federally controlled chemical.
When they find the guy that did this, he's not going to be enjoying his stay at the local detention facility. Additionally, dispersing a federally controlled chemical in an inappropriate manner is a federal crime. Add on the act of vandalism and you're not sitting pretty. If the chemical hits the water table, we cross over in to an act of terrorism.
Now, I love football more than any other sport out there. I'll watch anybody play on just about any day of the week. Sadly, the Auburn/Alabama rivalry has often been taken to an extreme and this one blows just about everything out of the water save actually killing a rival fan.
The 130-year-old trees on campus will likely die. I spent a few moments on Toomer's Corner last night and the mood was odd- there were camera crews and news trucks as far as you could see and folks were again doing what they do on Toomer's, slinging toilet paper.
Yes they are just trees, but there is no more iconic landmark in the state of Alabama in football. The tradition will continue, whether the trees survive or don't, and football will go on in Alabama.
Whether you shout War Eagle or Roll Tide(or cheer for anybody else), remember that football and sporting events are not worth destroying something that means so much to so many people. You don't look like a hero and certainly won't be hailed as a martyr when they haul you off to federal prison.
Keep things in perspective, people.
Links:
Toomer's Trees Poisoned - al.com
Poisoning New Low - al.com
See Toomer's Corner LIVE via webcam here
Posted by Nick Lovelady at 7:53 AM