Kitchen Dilemma: What do I do with the trash can? 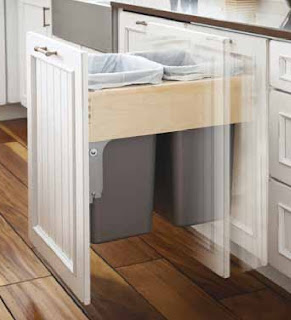 KraftMaid Cabinetry
A commonly addressed piece of the kitchen design puzzle is the trash can. More often than not, homeowners are concerned with major appliances that the waste bins seem to slip their minds. Obviously, having a good kitchen designer in your corner helps on keeping tabs of those seemingly forgettable but very important details.
When planning your new kitchen, advise your kitchen designer of your trashy habits... Not the swearing and the junk food, but how you throw away waste. Do you recycle? Plastic, glass, and compost? Just aluminum? What about dry waste? Yikes- didn't realize trash was such a complicated deal!
Now that you think about it... that separate bin that sits out in your kitchen with aluminum cans is an eyesore, right? Hate looking at it?
One of the primary principles of Feng Shui(if you aren't familiar, it isn't some radical design religion. It is however, a guide with some pretty basic steps to making your home a pleasant, aesthetic place to be) is to have the waste bin out of view. Pretty simple, eh? I suppose that out of view would mean in the garage or laundry room, but who wants to walk out of the room to deposit some trash?
The bin system above is perhaps my favorite- a top mount, double bin(standard 13-gallon) on a solid(you want this- think about how much you use the trashcan) dovetail platform with soft-close. KraftMaid introduced this model as part of their 2011 launch that has me in all sorts of good spirits. The addition to the standard operation is the soft-close mechanism that is so popular on the KraftMaid drawer.
A question that I get a lot is, "I've seen a trashcan cabinet with a drawer over it... Can I have that?" Sure, it's available. BUT.... (You knew there was a but) think about what you are going to have in the bottom of that cabinet and figure out what you'd want to put in a drawer that will be in the same cabinet as your kitchen waste. If you don't have trash that smells bad then go for it- personally, I like the single door, top-mount. Even brings the trash can up a bit higher so that when I am acting like an NBA pro throwing trash away I have a better chance at making the toss from downtown(wink, wink). In all seriousness, the drawer on top option is good for a place to store your trash bags and that's about it, in my opinion.
Not everyone is putting in a new kitchen right now, but there are still options to get that waste bin out of the corner. Talk with your local designer(or us, of course) about solutions that will work with your existing space.
Now, doesn't your kitchen look better without that unsightly trash/recycle bin sitting out?
Posted by Nick Lovelady at 7:06 AM