In an effort to prevent “Wordless Wednesday” from migrating into “Mum Monday” or “Tongue-tied Thursday”, I’ve decided to toss some content in for my buddy Nick. Today, then, you’ll not get reports from a smarmy kitchen couturier. Instead, what follows are the musings of a mere prickly postman…
Laguiole - French for Luxury?
The l’Aubrac region of France certainly isn’t a well known place. It has none of the cachet of Paris or the modern history of Normandy. A quick Wikipedia scan will tell you that “bovine breeding is the main activity on the plateau”. Still, about 30 craftsmen take some time off from breeding with said cattle to make some of the finest pocketknives in the world. 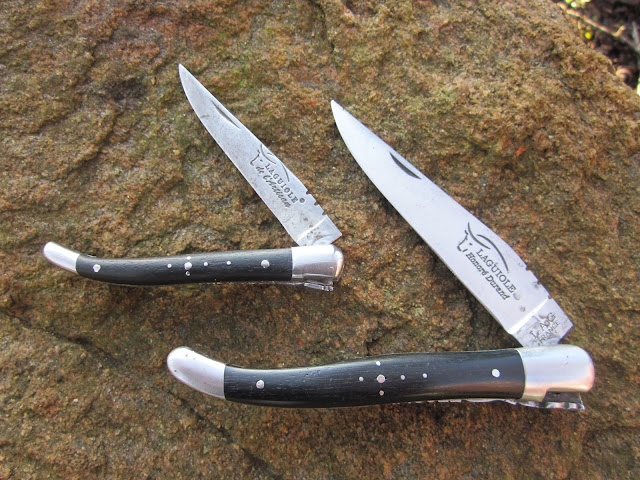 Pictured are two models from the Prestige Line at La Coutellerie de Laguiole. These guys make stunning knives, and no other company even compares. The kicker is the level of customization allowed. A quick glance reveals 35 handle materials, from the ebony featured above to beautiful vine stock, elm burl, and ivory. Each knife is forged by hand, and is chisel engraved on the knife spring and blade. The chiseled name costs extra, 7 Euros a letter…but hey, at least your name’s not LeCompte! 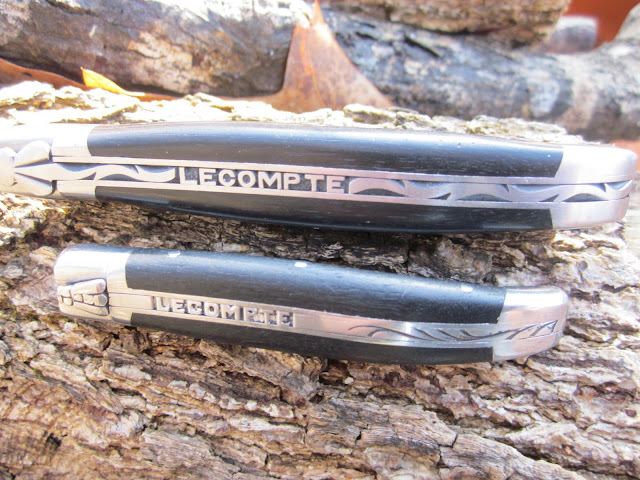 The price? A standard model will set you back less than 50 bones…as shown, about $150. Turnaround time seems to be less than a month from order to arrival.
Father’s Day is rapidly approaching. Don’t you owe him something nice after decades of fingerpainted masterpieces and macaroni collages?
By the way… watch out for cheap knockoffs! Most of the Laguiole knives you see here in the USA are factory made Forge de Laguiole knives from Thiers, and don’t even compare…
_____________________________________________________
Nick's Note: It's great to have some of the Cupboards "extended family" contributing on the blog. Thanks again to Jerod for stepping in- hopefully it's only the first of many posts to come!
Posted by Nick Lovelady at 6:00 AM